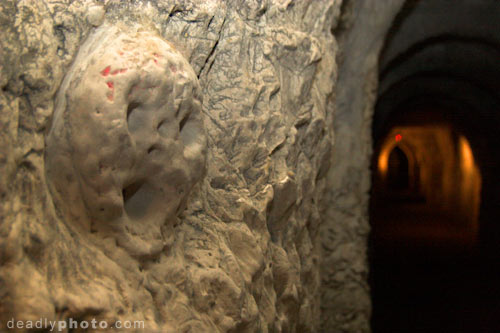 Back in 1998, blather.net visited the Hellfire Club tunnels, in West Wycombe, Buckinghamshire – which, in case you don’t know, is about 50km out of London. Back then, I knew very little about photography – I pointed and I shot, and was pleased enough. Now, I know a little more, and hope I’ve presented some better images of one very, very odd place.
I’ve already written extensively on blather.net about the Hellfire Clubs, both the Irish Hellfire Club and their English counterparts. So, rather than getting into an explanation of 18th century rakes and satanists, I’m going to stick with talking about our recent visit.
In November 2005, a crack blather.net & Strange Attractor team descended upon West Wycombe. First, however, we decided to track down the whereabouts of Medmenham Abbey, where Sir Francis Dashwood, and his Knights of St. Francis had their Bacchanalian raves. Many writers confuse the two – claiming that the Hellfire Club had their orgies in the tunnels, while in fact, Dashwood commissioned the digging of the tunnels quite late in life, and after the heyday of the ‘club’.
We found Medmenham Abbey easily enough – on a beautiful stretch of the Thames, between Henley and Marlow. The problem is, if you’re on the same side of the river as the Abbey, you can’t see it – the walls are too high. We decided to see it from the other side of the river. Back in the car, we made for Hurley, via Henley. Before heading out on the towpath, we visited the churchyard in Hurley.
The Thames has abundant wildlife here – grebes in the water, and kites (the bird of prey) flying overhead. And then there’s the camera-loving llama in a field along the way.
About a half-hour walk took us up where got a full view of the Abbey – these days, it’s a privately owned residence, and by the looks of it, the owner has plenty of money. Cistercian monks founded Medmenham Abbey about 1145, which survived until the dissolution of the monasteries in about 1540. In the mid-17th century, Sir Francis Dashwood – then Chancellor of the Exchequer – got his hands on what was left, and used it as a scandalous private club for his friends.
More about Sir Francis Dashwood &raquo
It’s a quick drive from Hurley to Marlow, and then on to High Wycombe. Driving out of High Wycombe towards the village West Wycombe, the Dashwood Mausoleum is visible on top of the hill, directly ahead. It’s a quick, but steep climb up to the mausoleum – a massive flint structure that looks more like a fortress than a last resting place for the dead.
Just up the hill is St. Lawrence’s Church – built by Dashwood, from the ruins of an old Norman tower, which itself was inside the banked enclosure of West Wycombe Camp – an iron age fortification. Dashwood, in a fit of Italian fervour, modelled the tower on the customs house in Venice – and put a large golden sphere on top. This (Christian ) church is claimed to be 300 feet (91m) above the ‘Inner Temple’ of the caverns.
Back down the hill, are the slightly tacky entrances to the tunnels. When we visited, we got the impression that the staff hadn’t quite cleared up after Halloween, but instead we’re putting together a ‘scary Christmas’ theme from the Samhain leftovers. The cafe and souvenir shop has lots of plastic tat – rubber bats and the like. The management seem obsessed with marketing the place as a good, clean, wholesome family day out. Disney with a slight edge. This is ironic, given the history of the place, and Dashwood’s carry-on.
Inside, the disembodied voice of the recently-deceased most-recent Sir Francis Dashwood greets us, telling us the story of the caves. The tunnels aren’t natural – they were dug out by local workers at the behest of Dashwood following a crop failure. They used the chalk from the caves to build what is now the A40, in order to rejuvenate the local economy.
However, instead of digging a quarry, Dashwood created a bizarre tunnel system, with a banqueting hall, an inner temple – and even a fake River Styx. Everywhere in the tunnels, carved faces leer. I don’t remember so many the last time – I have a suspicion that some of them are fairly recent, but I can’t be sure. They cute carving of a cat on one wall is definitely suspect.
But enough blather from me – enjoy the photographs…

(‘XXII’ refers to a marking on the wall, mentioned in a poem of the time… )
To purchase high resolution copies of these photographs, please visit davewalshphoto.com » 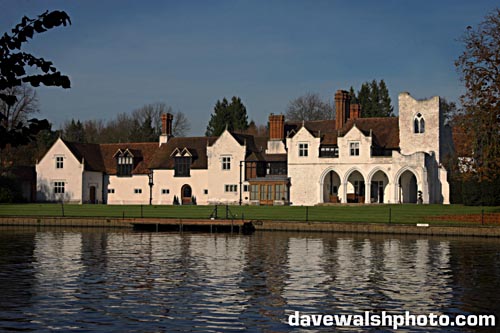 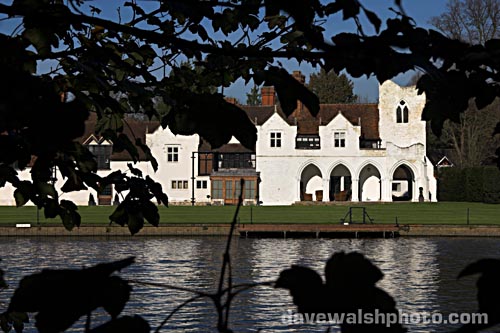 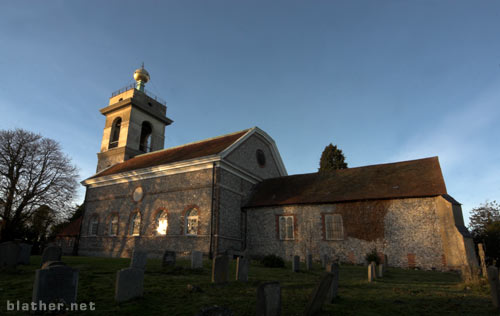 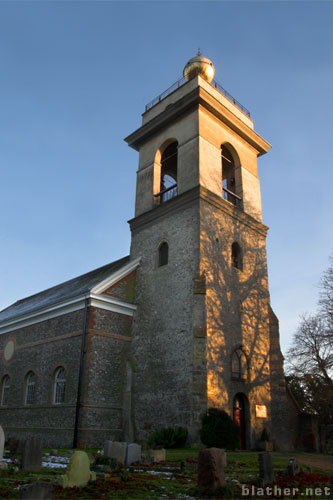 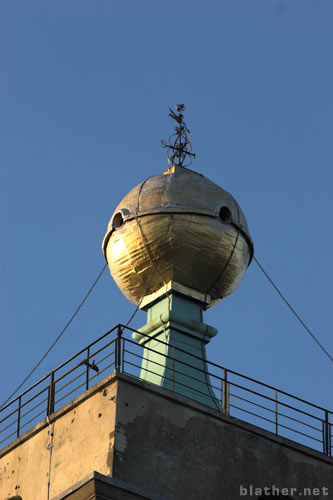 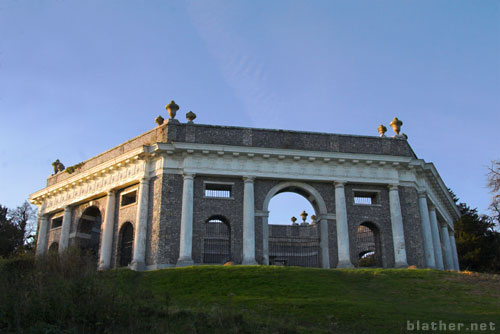 The Dashwood mausoleum. Hammer fans might recognise it from the movie based on a Dennis Wheatley novel, To the Devil a Daughter (1976)
To purchase high resolution copies of these photographs, please visit davewalshphoto.com » 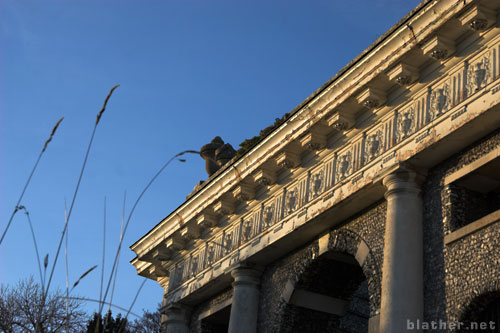 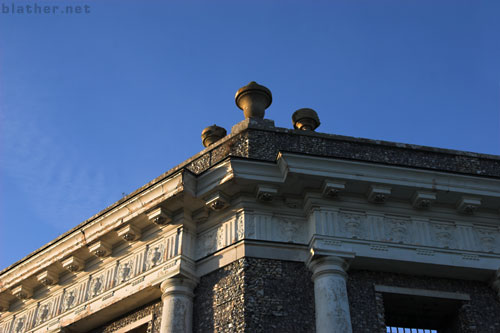 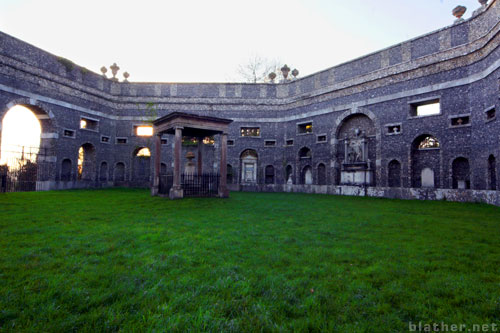 Inside the mausoleum
To purchase high resolution copies of these photographs, please visit davewalshphoto.com » 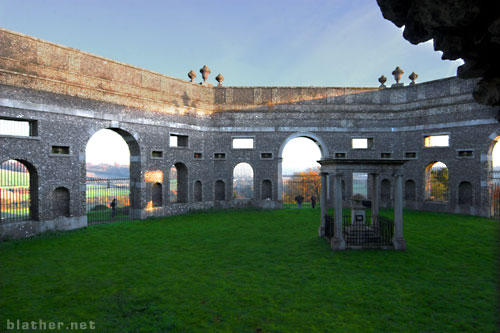 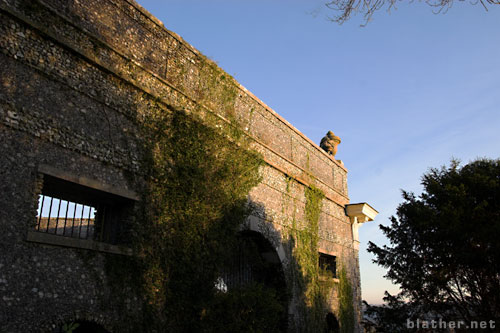 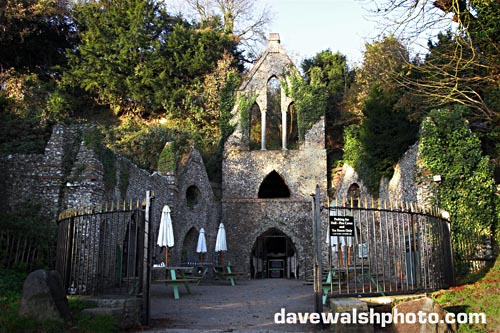 The entrance to the Hellfire Club Tunnels, at West Wycombe 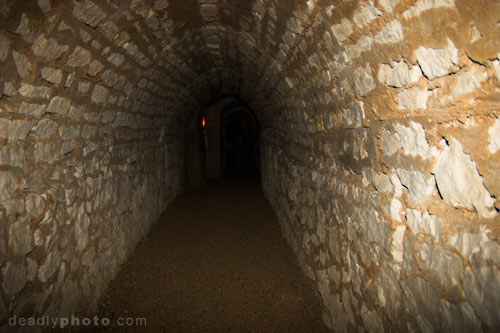 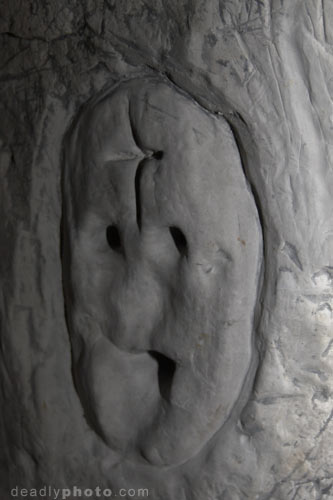 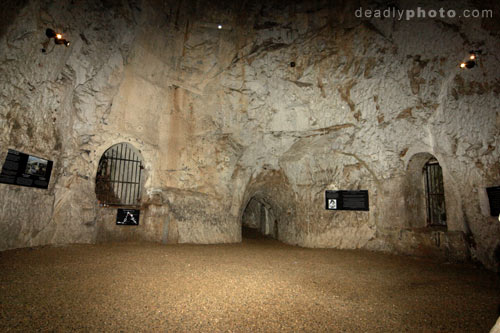 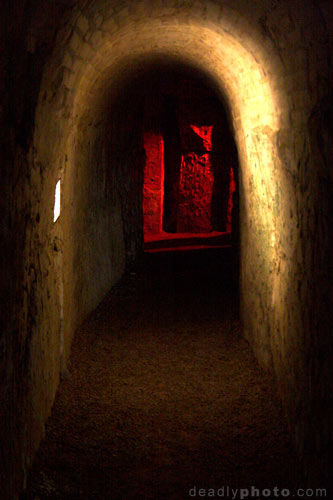 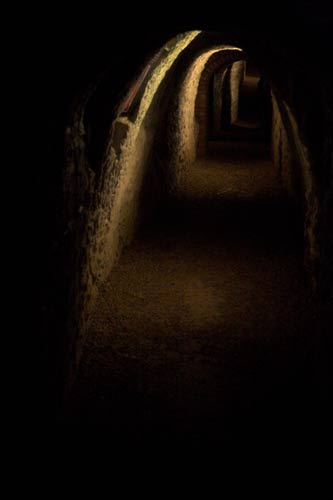 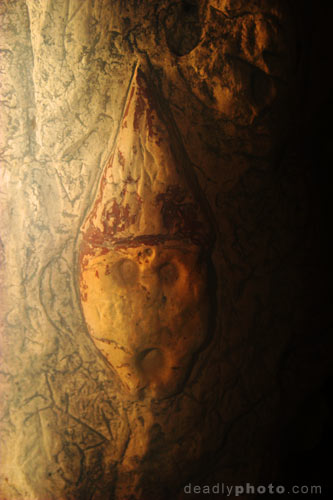 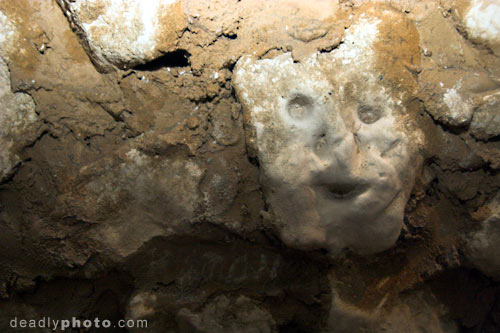 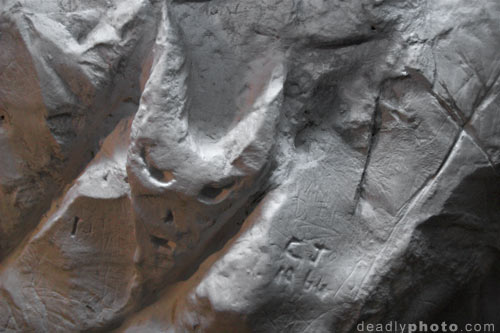 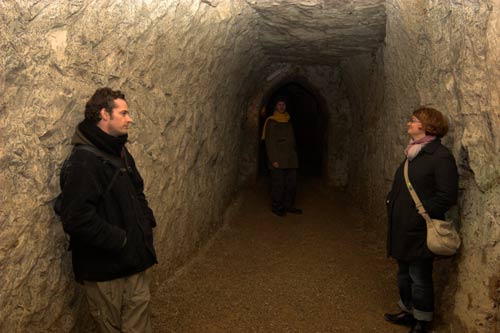 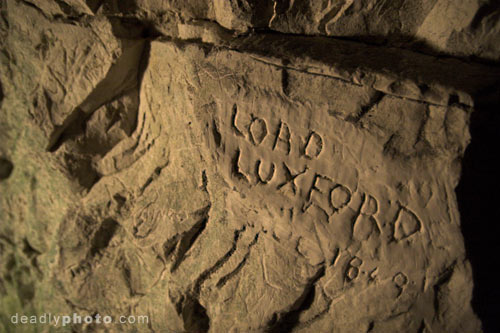 Who was Lord Luxford? 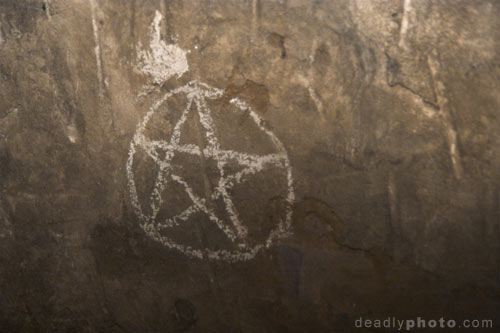 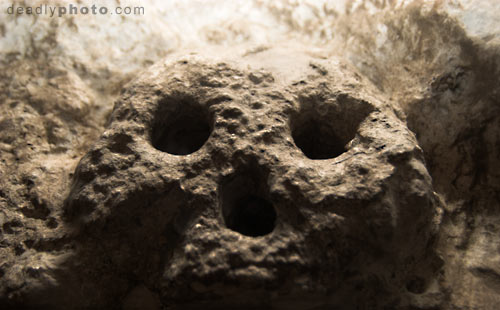 A copy of a page from the cellar book from Medmenham, kept in the tunnels at West Wycombe, detailing what the Knights of St. Francis were drinking. 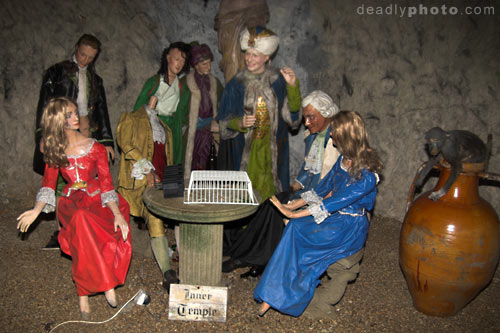 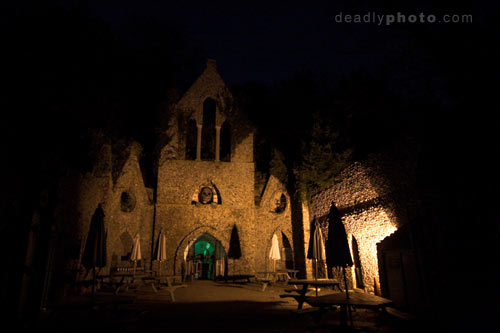 The entrance to the Hellfire Club Tunnels at night. Note tacky skull in centre of photograph.
To purchase high resolution copies of these photographs, please visit davewalshphoto.com »
daev

Chief Bottle Washer at Blather
Writer, photographer, environmental campaigner and "known troublemaker" Dave Walsh is the founder of Blather.net, described both as "possibly the most arrogant and depraved website to be found either side of the majestic Shannon River", and "the nicest website circulating in Ireland". Half Irishman, half-bicycle. He lives in southern Irish city of Barcelona.
previous article
Waking the Dead: Standing on the Bones of Irish Giants
next article
Diggin in the Dirt: Niall of the Nine Sausages (sausage the first)