Tasmanian devils – Cedric to the rescue! 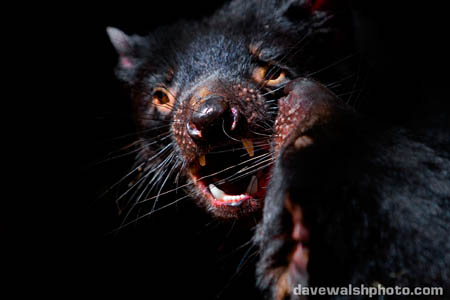 This time two months ago, I was in Tasmania – and I saw my first Tasmanian Devils up close. While generally deeply interested (perhaps obsessed) by wildlife, encountering Tassie devils was high on my list – and these photographs are the fruits of my labours. Now, a Tasmanian devil superhero named Cedric has made news this week, after scientists found that his genes may save the species from extinction.

This time two months ago, I was in Tasmania – and I saw my first Tasmanian Devils up close. While generally deeply interested (perhaps obsessed) by wildlife, encountering Tassie devils was high on my list – and these photographs are the fruits of my labours. Now, a Tasmanian devil named Cedric has made news this week, after scientists found that his genes may save the species from extinction.
Tasmanian Devils – now the largest carnivorous marsupial following the apparent demise of the thylacine, or Tasmanian Tiger – are threatened by the bizarre and distressing Devil Facial Tumour Disease (DFTD), which appears to be a contagious viral cancer – only one of three such cancers known. Tumours grow around the animals’ faces, making it impossible for them feed; they starve to death.
All over Tasmania, there has been a 53% decline in average sightings of devils between surveys done in 1992-95 and 2003-06, and the disease is found in 59% of the island. All kinds of theories abound on the cause of the disease – everything from use of toxic sprays to lack of natural genetic diversity.
Things were looking pretty glum for the devils, although remedial work was taking place. When I was in Tasmania in February, I met the “Devil Woman”, scientist Chrissy Pukk, who was working on the Forestier-Tasman Peninsula, driving a project to suppress the disease. The Tasman Peninsula is ideal for controlling the population, as it’s isolated from the rest of Tasmania thanks to the Denison Canal – making it almost an island in itself. When I visited, Chrissy had two young devils, Mozart and Tosca, in a pen near her house, that had been separated from their diseased parents. She was teaching them how to fend for themselves, in preparation for a “soft release” back into the wild, away from diseased populations.
Cedric, however, was in the news this week because he’s the first devil to display immunity from the disease. Scientists injected Cedric and his half-brother, Clinky, with dead facial tumour disease cells; Clinky produced no anti-bodies, but Cedric did. This is creating hope for the devil population, through Cedric’s resistance to the disease. One of the theories surrounding the disease is that was created by cell mutation in just one animal, which then passed like wildfire – so maybe Cedric is the one animal who can stop put a halt to it.
Two months ago the two animals were infected with live cells. Scientists expect that Clinky will contract the disease but Cedric, with his different genes, will not. It’s still too early to tell for sure – DFTD can have a six-month incubation period.
I realise, banging away on my keyboard here, that many readers may not know much about the Tassie devil. Well, picture this – it’s a small meat-eating, scavenging animal, about the size of a Jack Russell dog. It’s got bluish black hair, a huge damp nose, wiry whiskers, very red ears, and some fine claws. There’s usually a white stripe on the chest and hindquarters, and they make a god awful sound when they howl their blood-curdling scream. It’s this noise that apparently led the early European arrivals in Tasmania to name it the “devil”, although its red ears probably didn’t help.
The devil also has a fearsome mouth – its jaw can exert four times the bite of a dog the same size. When Tasmanian farmers lose a cow to a natural death overnight, if there’s devils around, there will be very cow left in the morning – if anything at all. In fact, they can swallow, and, to some extent, digest, every bone in the human body. They will eat through fences, cages, you name it. Even each other!
This isn’t to say they go out of their way to attack cows or humans – they don’t. However, you’ve got to watch those nasty little gobs should you have to handle one, and they’re impossible to really tame. I spoke to one man, who some years ago, spent several months fostering a young orphan. One day it, unexpectedly, it turned around, and sank its teeth in to his arm, breaking the bones. I watched some of his current charges fighting over a wallaby carcass – there are no table manners or etiquette at the devil table – they seem as likely to bite each other as the meat.
This devil pugnaciousness when feeding, mating, or just playing, has aided the spread of the disease, which can also be spread through shared eating. One evening in Tasmania, I took a high-speed road trip with Chrissy Pukk as she looked for fresh roadkill. The dead wombats, wallabies, possums and bandicoots picked up and fed to captive devils have to be “unadulterated” – no other scavenger can have taken a chunk from it. The saliva or blood of diseased devil could easily be spread this way. Later, I had a chanced to photograph Chrissy’s roadkill collection, and her feeding a dead wallaby to the hungry little devils.
So – enjoy the devil photographs, and maybe say a prayer to the Prince of Darkness that his subjects recovered from this nastiness. And maybe, like me, you can dress up like a Tasmanian devil, as part of the ritual…
Note: All devils photographed are captives – either recovering from injuries or orphaned from disease
The Australian: Hope of cure for dying Tasmanian devils
Tassie Devil Research »
Save the Tassie Devil »
Wikipedia: Tasmanian Devil »
All Tasmanian Devil photographs available from davewalshphoto.com » 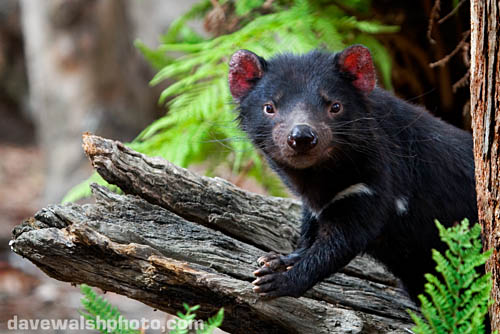 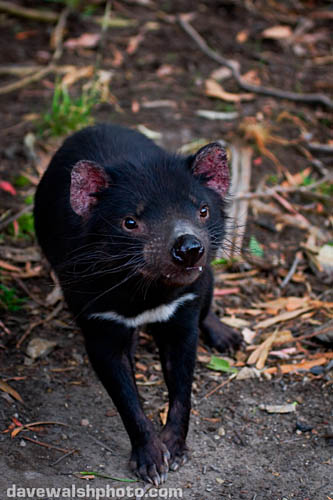 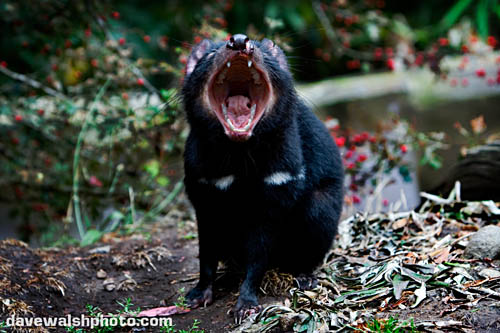 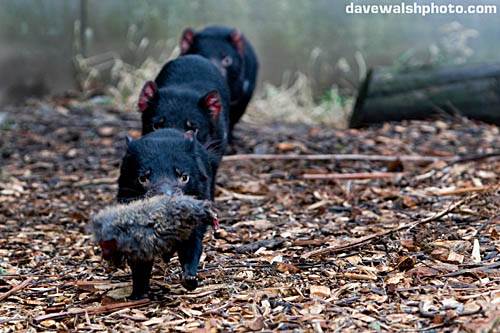 One has the roadkill – wallaby, the others are in pursuit. 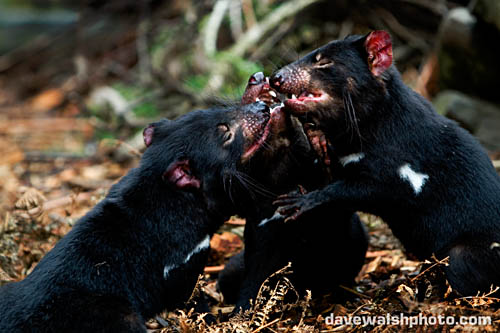 Now this is all that’s left of the wallaby 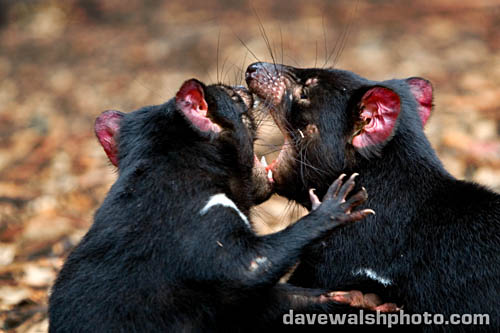 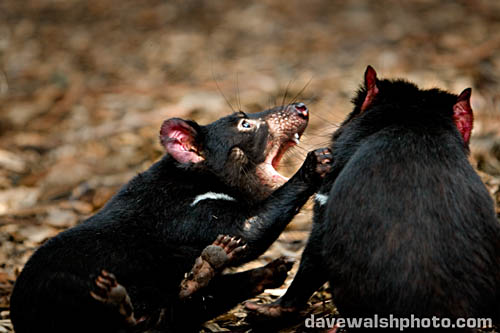 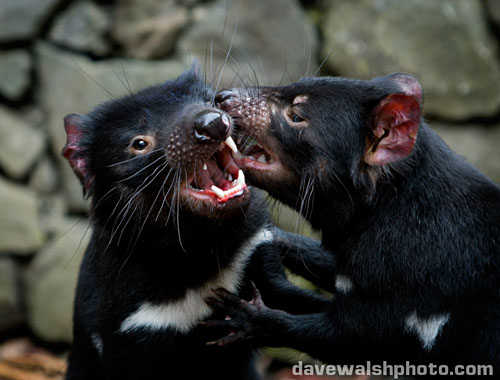 Is that a kiss or a bite? 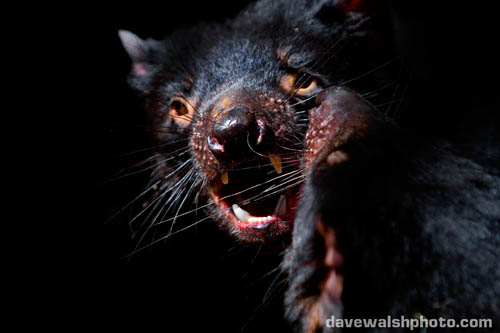 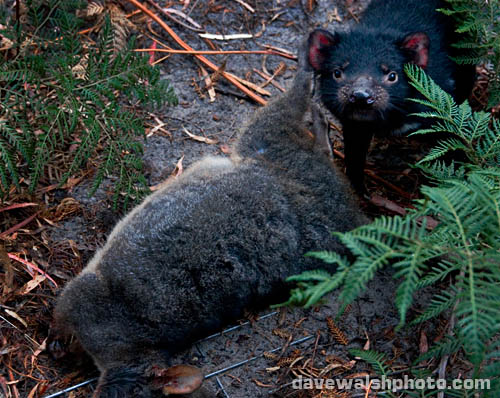 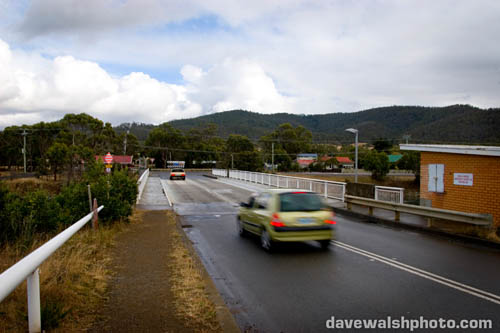 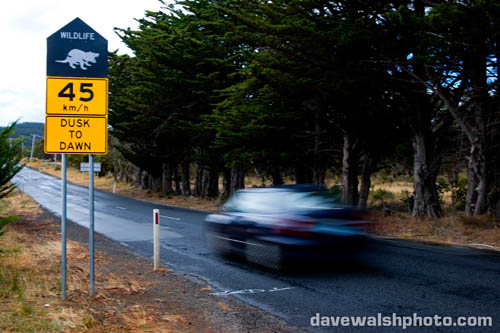 Tasmanian Devil signs near Dunally – from Dusk to Dawn 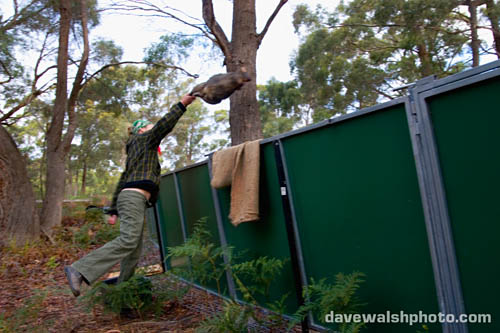 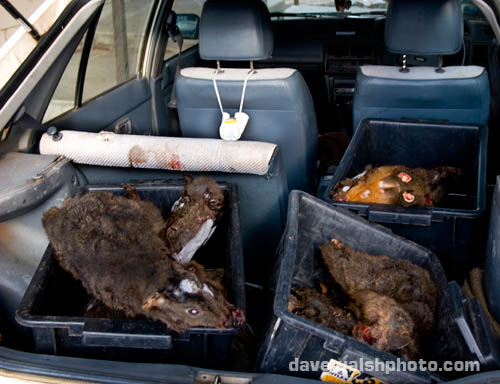 Collected roadkill for the devils 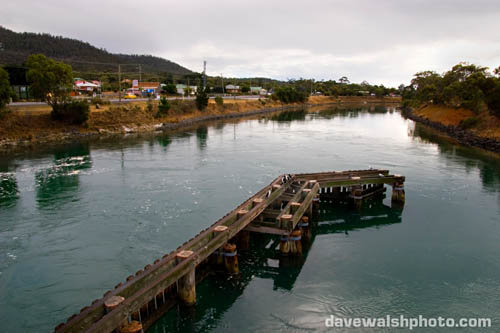 The Denison Canal at Dunally Chief Bottle Washer at Blather
Writer, photographer, environmental campaigner and "known troublemaker" Dave Walsh is the founder of Blather.net, described both as "possibly the most arrogant and depraved website to be found either side of the majestic Shannon River", and "the nicest website circulating in Ireland". Half Irishman, half-bicycle. He lives in southern Irish city of Barcelona.
previous article
Blather.net’s Map of the Weird
next article
How I Helped Write the (Fictional) History of Clontarf