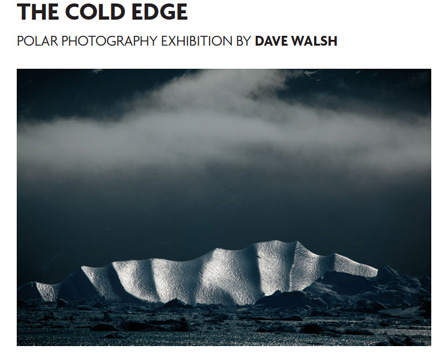 From davewalshphoto.com: There comes a time in a photographer’s life when (s)he finally gets to announce the Big News; a first major solo exhibition. It’s unnerving, exciting, heartening, and reassuring. There’s also the sense of achievement, and a feeling of “yes, I was right to hammer away so for many years on something I care passionately about”. And so, many, many thanks to Leszek Wolnik, at The Copper House Gallery in Dublin who has invited me to show my work on September 13th, 2012.

The Cold Edge exhibition brings comprise 16 images from a wider collection, drawn from my many trips beyond the Arctic and Antarctic circles. I think they give a sense of uncertain beauty, fragile, yet fierce, a liminal zone where we have to face the fear of straying further – in space, but also in a metaphoric sense. But rather than scare people away from the polar regions, I want people to embrace them – not necessarily to travel there,but to embrace them as integral part of life on our planet, rather than somewhere infinitely exotic, or something simply watched on TV.
The show opens at 6:00 on September 13, and runs until the 29th, at The Copper House Gallery, Dublin. You can RSVP via my Facebook page, and here’s directions to the gallery, which is close to Dublin’s Camden St. My friend, geologist poet Duncan Cleary will introduce the exhibition, and I’m sure it’ll be a wild evening.
See the photographs, and read the full blog »

Chief Bottle Washer at Blather
Writer, photographer, environmental campaigner and "known troublemaker" Dave Walsh is the founder of Blather.net, described both as "possibly the most arrogant and depraved website to be found either side of the majestic Shannon River", and "the nicest website circulating in Ireland". Half Irishman, half-bicycle. He lives in southern Irish city of Barcelona.
previous article
A Book of Migrations by Rebecca Solnit – photography by Dave Walsh
next article
Book: The Cold Edge