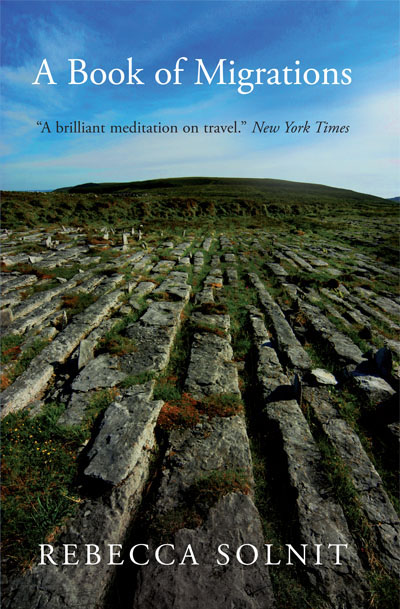 In all my years as a writer, I’ve written many book reviews. But I’ve never before reviewed a book that uses one of my photographs as its cover. I’m talking about The Book of Migrations: Some Passages in Ireland, by Rebecca Solnit, which has been a joy to read, and an honour to become connected with. I was unaware of Solnit’s work until May 24th of this year, when I read her insightful article the Strauss-Kahn affair, colonisation and the IMF: Worlds Collide in a Luxury Suite. That afternoon, I received an email from Bob Bhamra, of Verso Books, asking me if he could use my image of the Burren for a new editon of The Book of Migrations. Serendipity. We cut a deal.
A couple of months pass, and a copy of The Book of Migrations arrives. I take it with me on a train from Amsterdam to Perpignan, and fall in love with the text. Solnit’s book is an exploration of the nature of being, place and travel, overlaying a real, physical itinerary around Ireland.

Chief Bottle Washer at Blather
Writer, photographer, environmental campaigner and "known troublemaker" Dave Walsh is the founder of Blather.net, described both as "possibly the most arrogant and depraved website to be found either side of the majestic Shannon River", and "the nicest website circulating in Ireland". Half Irishman, half-bicycle. He lives in southern Irish city of Barcelona.
previous article
The Lion and Unicorn Amnesty: A Plea for the Safe Return of England
next article
The Cold Edge: Polar Photography by Dave Walsh