Oliver Plunkett and other dead stuff…

Ok, yet more stuff from the Fortean Society foray into north Leinster.
St. Oliver Plunkett’s head rests in a glass shrine in St. Peter’s Church, in Drogheda. He was recently beatified, but will probably still be referred to as ‘Blessed Oliver’ – his previous title. In our Fortean group, however, he will referred to as ‘The Severed Head’. A native of Loughcrew, Co. Meath, Ollie was a 17th century Archbishop of Armagh, and was martyred at Tyburn in 1691. Whatever the charges against him, he was apparently executed for contravening the penal laws, which forbade the practice of Catholic rites.
His sentence:

“Well, however, the judgement which we must give you is that which the law says and speaks. And therefore you must go from hence to the place from whence you came, that is Newgate. And from thence you shall be drawn ( two miles by sledge) through the City of London to Tyburn; there you shall be hanged by the neck but cut down before you are dead, your bowels taken out and burnt bore ur fe, your head shall be cut off, and your body divided into four quarters to be disposed of as his majesty pleases. And I pray God to have mercy on your soul.”
Read More »
Note: There’s a little information booklet available in the church, referring to the soaking of Ollie’s head in creosote. I’ll post more on this later today, when I’m home.
Note: This photograph isn’t the best. I intend to return to take some more ‘controlled’ photographs… 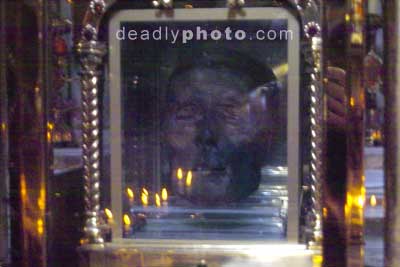 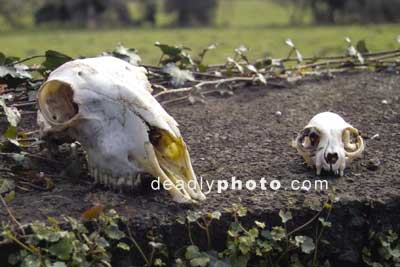 A couple of skulls – a sheep and a cat, I think, in the churchyard at Dowth 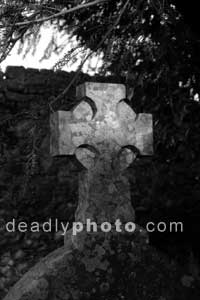 Headstone in the churchyard at Dowth

A lonely saint in Dublin’s liberties

Chief Bottle Washer at Blather
Writer, photographer, environmental campaigner and "known troublemaker" Dave Walsh is the founder of Blather.net, described both as "possibly the most arrogant and depraved website to be found either side of the majestic Shannon River", and "the nicest website circulating in Ireland". Half Irishman, half-bicycle. He lives in southern Irish city of Barcelona.
previous article
The Hill of Slane
next article
The Truth: Otters Are Sexy