The dead are coming to dance in Dublin

Finally, thankfully, mercifully, Dead Can Dance have announced their tour dates for the highly anticipated 2005 reunion tour. I can guarantee that at least one blather correspondent will be going…
Date: Thursday March 10, 2005
Venue: Olympia Theatre, Dublin 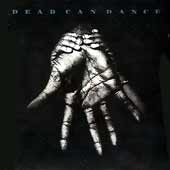 Damien DeBarra was born in the late 20th century and grew up in Dublin, Ireland. He now lives in London, England where he shares a house with four laptops, three bikes and a large collection of chairs.
previous article
Hamlet, at the Town Hall Theatre, Galway
next article
Wheelie bins of the apocalypse