Blather meets Out There Radio 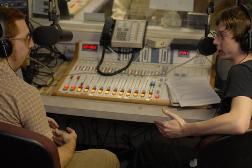 ‘Out There Radio’ is the brainchild of Messrs. Joe McFall and Raymond Wiley. Broadcasting from Athens, Georgia and touching on every form of conspiracy theory and fortean phenomena imaginable, ‘Out There’ is an excellent podcast, covering ground that should be quite familiar to readers of Blather.net. We recently caught up with Joe McFall and invited him to introduce himself and ‘Out There’ to Blatherskites.

Blather: Who is responsible for ‘Out There Radio’ and how did you all get together?
Joe: Raymond’s really the captain of the ship here…
Blather: Who would you cite as your most prominent influences?
Joe: Like many who have read Robert Anton Wilson, I would say that his books, especially /Prometheus Rising/ and /Cosmic Trigger/, had a profound effect on me, moreso than the works of any other author or artist. Timothy Leary, too. Many people who trash Leary for exposing entheogens to the public (and, therefore, to the legal system) have never really read his books. Check out /The Politics of Ecstasy/ or /Neuropolitique./ The man was a genius. Some others: William Burroughs, Terence McKenna, Philip K. Dick, Jello Biafra, Kurt Vonnegut, Tom Robbins…
Blather: You deal with UFOlogy and the paranormal a great deal. Would you say you have a definite slant on these issues? Are there any schools of thought or even books which have shaped the way you approach these issues?
Joe: I tend to be a skeptic about most things of this sort. I personally don’t subscribe to the literal interpretation of UFO sightings and alien abductions, that little grey extraterrestrials are visiting us. I tend to think that these kinds of phenomena (ghosts and sasquatches included) are manifestations of something deeper in the human subconscious. These are visionary, shamanic experiences, metaphors for the future of our species, or the past in the case of sasquatch. I have never seen hard evidence of anything that makes be believe otherwise, but I’m certainly open to it.
Blather: Which is your favourite Out There Radio podcast and why?
Joe: /Guyana’s Heart of Darkness,/ the one about Jonestown, is one of my favourites. /The Ashes of Waco/ with Dick Reavis is generally regarded as one of our best interviews. I also liked interviewing Peter Gilmore, the High Priest of the Church of Satan in episode 25. /Praise Bob/ with Rev. Ivan Stang was a hoot; Stang and the Church of the Subgenius have also been big influences.
Blather: Name the five people (dead or alive!) you would most like to sit down for beers and an out there interview?
Joe: Robert Anton Wilson, Timothy Leary, Terence McKenna, Tom Robbins and William Burroughs. I’d also like to speak to E. Howard Hunt, Lee Harvey Oswald and Mohammed Atta.
Blather: Do you think ufology is a dying discipline in the 21st century?
Joe: If there has been any decline in general interest in UFOs, perhaps it’s because the extraterrestrial metaphor is sort of a leftover from the 50s. I think that an upcoming paradigm shift in western culture could have the potential to change these kinds of metaphors. Sometime in the 20th century, visions of angels turned into visions of aliens, and within the next 20-50 years, as the evolution of our culture and technology accelerates, our archetypes will shift along with it. If true machine consciousness emerges within this timeframe (ask Ray Kurzweil), our gods will completely change.
Blather: Have you ever had a paranormal experience? And if so – what was it?
Joe: I experienced some poltergeist phenomena while camping the woods one night in North Carolina. Rocks were being lobbed around our campsite for a good three hours. I still don’t have a satisfactory explanation for that experience, but I’d like to go back there some time to check it out.
Blather: Where do you see out there radio going next? Any plans to make a TV show or something like that or are you happy in the current medium?
Joe: We’ve got big plans…
+More+
Visit Out There Radio.
+Listen+
Press play.

Damien DeBarra was born in the late 20th century and grew up in Dublin, Ireland. He now lives in London, England where he shares a house with four laptops, three bikes and a large collection of chairs.
previous article
Conspiracy of Silence; UFOs in Ireland
next article
Anarchy on the High Seas