Black Market Nukes! Part three: Couldn’t You Keep That To Yourself? 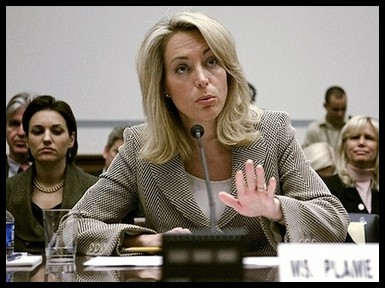 Let me sli – ide down along the side of this picture here and get into position to welcome you our readers back once again to Blather‘s very convoluted yet very informative 5-part series Black Market Nukes! To kick off this, the third part, which in one respect involves Valerie Plame (pictured), I should remind you of the main point of part one of this series. I wrote of how an ex-FBI employee, Sibel Edmonds, revealed that she worked on a project in which she listened to wiretaps and translated them. She listened to phone traffic between the Turkish embassy and the Turkish lobby group the American Turkish Council (ATC), involving dealings in the nuclear black market. But this FBI investigation she was working on was shut down, and her contract was terminated. It seems the FBI team went too deep, got too close to an uncomfortable truth…

Essentially, foreign agents were attempting to get their hands on American nuclear secrets and technology, and the buyers for this stuff were the Pakistani ISI working with nuclear black marketeer A.Q. Khan [1] whose customers I told you something of in part two.

Sibel Edmonds has named U.S. government officials whom she claimed helped make this happen. In Chris Gourlay, Jonathan Calvert and Joe Lauria’s first article about the case for The Sunday Times [2], they wrote that they ‘talked to two FBI officers (one serving, one former) and two former CIA sources who worked on nuclear proliferation. While none was aware of specific allegations against officials she names, they did provide overlapping corroboration of Edmonds’s story.’

Sibel Edmonds listened [24] to conversations between a U.S. official in the State Department and the Turkish embassy, which took place between August and December 2001. She overheard the official say to members of the nuclear black market to beware of the company Brewster Jennings and Associates. This was a CIA front company investigating the connection between weapons of mass destruction (WMD) and the aforementioned ATC [3]. In Sibel Edmonds’s words: ‘he contacted one of the foreign targets and said . . . you need to stay away from Brewster Jennings because they are a cover for the government… The target . . . immediately followed up by calling several people to warn them about Brewster Jennings… At least one of them was at the ATC. This person also called an ISI person to warn them’ [4].

The Sunday Times did not mention the official’s name for legal reasons [5], but the man was named in an anonymous letter to the Liberty Coalition (a tip-off I mentioned in part one) and in an indirect way by Sibel Edmonds (see part five of this series) and on Luke Ryland’s blog about the case [6]. The official who allegedly made the calls to the Turks is Marc Grossman, who was number three at the State Department at the time.

American readers will recognize Brewster Jennings and Associates from the Plame Affair, which was a big news item in the U.S. but I should give everyone else a helping hand. After that we’ll come back to the alleged Grossman Turkish tip-off.

Ok, this is long and complicated. I can give you a blow-by-blow account of the early stages, however.

February 2002. The CIA asked retired diplomat Joseph C. Wilson to travel to Niger for them. There were allegations at the time that Iraqi dictator Saddam Hussein had attempted to purchase uranium from Niger for some kind of secret weapons of mass destruction project. Italian journalists had discovered that the only evidence for this was from forged documents written by a con-man. Wilson went to Niger and found that the US ambassador to Niger concurred, and he saw how the uranium mines were overseen by an international consortium and by the International Atomic Energy Agency (IAEA).

September 2002. The British government published a ‘white paper’ on what a dangerous ‘immediate’ threat to the world Saddam Hussein was, and in amongst the bullshit in the erroneous shite paper was Iraq’s alleged attempts to purchase uranium from an ‘African country’.

December 2002. The U.S. State Department published a ‘fact sheet’ about Saddam and WMD that mentioned the alleged Iraq-Niger connection.

(Now I don’t know if the Brits were referring to the Niger case or not in their incorrect assertions, but I presume this is what Joseph Wilson took it to mean when he heard the State of the Union address and got annoyed) [21].

March 2003. The U.S. and Britain invaded Iraq. No WMDs were found. Saddam had no secret weapons programmes. Since then, 1.2 million Iraqis have died.

6 July 2003. Joseph Wilson wrote in the New York Times a piece entitled ‘What I Didn’t Find in Africa’ [7], detailing his trip to Niger for the CIA in February 2002.

14 July 2003. Robert D. Novak [22] wrote a piece in the Washington Post entitled ‘Mission to Niger’ [8], in which he rebutted Wilson, claiming that George Tenet, the director of the CIA, never saw Wilson’s report to the CIA, therefore concluding that Bush could not have been lying in the State of Union Address.

Now I’m getting to the important bit…

Novak, in that Washington Post article, stated that while Wilson was not in the CIA, his wife, Valerie Plame, was ‘an agency operative on weapons of mass destruction’, thereby blowing her cover. The leaking of this information to Novak was revenge on Wilson from the Bush Administration, for not keeping his mouth shut about one of their phony reasons for going to war with Iraq. It was later revealed that Richard Armitage, the Deputy Secretary of State, 2001-5, was the ‘primary source’ of the leak, and Karl Rove, the Senior policy advisor to President Bush until the end of august 2007, was the second source, who confirmed the information for the nefarious Novak [25].

3 October 2003. Novak went further against Plame and Wilson. On CNN, he named Brewster Jennings & Associates as Plame’s employer, saying there was ‘no such firm’ [9]. It was, as I mentioned above, a CIA front company.
To quote the Sunday Times [10]: ‘Brewster Jennings was one of a number of covert enterprises set up to infiltrate the nuclear ring. It is is believed to have been based in Boston and consisted of little more than a name, a telephone number and a post office box address. Plame listed the company as her employer on her 1999 tax forms and used its name when she made a $1,000 contribution to Al Gore’s presidential primary campaign.’

So Valerie Plame found herself outed by the Bush administration. This was investigated, and it led to the conviction of Scooter Libby, the former chief of staff to Vice President Dick Cheney. Libby was convicted on 6 March 2007. On 2 July, when Libby’s appeal failed, President Bush commuted Libby’s 30-month prison sentence, although he still had to do community service. There’s plenty to read about the Plame Affair elsewhere online [11], so I won’t go into more detail.

What we’re interested in is what Plame was doing for the CIA. At the March 2007 congressional hearings, Plame’s opening statement was: ‘In the run-up to the war with Iraq, I worked in the Counterproliferation Division of the CIA, still as a covert officer whose affiliation with the CIA was classified. I raced to discover solid intelligence for senior policy makers on Iraq’s presumed weapons of mass destruction program. While I helped to manage and run secret worldwide operations against this WMD target from CIA headquarters in Washington, I also traveled to foreign countries on secret missions to find vital intelligence’ [12].

According to the Sunday Times, the Counterproliferation Division was of course investigating more than the non-existent WMD programme of Iraq. Brewster Jennings & Associates was used by the CIA to investigate the ring trying to obtain U.S. nuclear secrets, and that this was a parallel investigation to the one being run by the FBI. ‘One group of Turkish agents who had come to America on the pretext of researching alternative energy sources was introduced to Brewster Jennings through the Washington-based American Turkish Council (ATC), a lobby group that aids commercial ties between the countries. Edmonds says the Turks believed Brewster Jennings to be energy consultants and were planning to hire them’ [13]. The Turks were apparently just about to hire Brewster Jenningswhen they were tipped off, allegedly by Marc Grossman.

Plame’s cover was blown in July 2003 and Brewster Jennings in October 2003. But that’s only publicly. Allegedly Grossman had already tipped off the people she was investigating, two years earlier! Look at the timeline: Sibel Edmonds listened to conversations between the man-who-is-allegedly-Grossman and the Turkish embassy between August and December 2001 [23]. As the Sunday Times put it: ‘If the ISI was made aware of the CIA front company, then this would almost certainly have damaged the investigation into the activities of Khan. Plame’s cover would also have been compromised, although Edmonds never heard her name mentioned on the intercepts’ [14].

How to obtain American nuclear secrets and get away with it

Marc Grossman had been the U.S. ambassador to Turkey. Edmonds’s allegations are that once he started working in the State Department, he was installing Turkish and Israeli phd students as moles into every nuclear lab and agency in the USA, including the facility at Los Alamos! [15]. Again from the Sunday Times [16]: ‘Edmonds says packages containing nuclear secrets were delivered by Turkish operatives, using their cover as members of the diplomatic and military community, to contacts at the Pakistani embassy in Washington. Following 9/11, a number of the foreign operatives were taken in for questioning by the FBI on suspicion that they knew about or somehow aided the attacks. Edmonds said the State Department official [allegedly Grossman] once again proved useful. “A primary target would call the official and point to names on the list and say, ‘We need to get them out of the US because we can’t afford for them to spill the beans’,” she said. “The official said that he would ‘take care of it’.” The four suspects on the list were released from interrogation and extradited.”‘

There’s no evidence that the Turkish state is working on a nuclear weapon! It seems that these Turks were just stealing the information for profit, and not only to the ‘designated’ buyer: by making copies they could sell to whoever wanted to buy [17].

But Turkey does have a nuclear energy programme. Back in 2000, U.S. President Bill Clinton tried to sign an executive order allowing Turkey access to American nuclear technology. This was blocked at the time [18] because, according to the next President, George W. Bush, ‘certain Turkish entities’ were actively engaged in ‘certain activities directly relating to nuclear proliferation’ [19].

On 6 January 2008, The Sunday Times started reporting on the nuclear black market aspect of Sibel Edmonds’s case, and lo and behold, on 22 January Bush signed an executive order allowing Turkey to have this technology [20].

So was Bush now retroactively covering for ‘certain Turkish entities’?

We know all about the Turks in A.Q. Khan’s nuclear proliferation network mentioned in part two: Selim Alguadis, Gunes Cire, Hank Slebos and Zeki Bilmen, plus the men in Dubai, BSA Tahir and Peter Griffin, the Israeli businessman Asher Karni, the German ‘pipe-man’ Gerhard Wisser, and the Tinner family. The latter will be the main focus of part four, because of the dramatic announcement in Switzerland earlier this year…