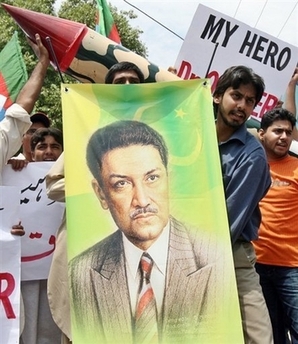 In part one, ex-FBI employee Sibel Edmonds listened to wiretaps of Turkish agents in the USA, who were stealing American nuclear secrets and selling them on the black market. The FBI investigation was surprisingly shut down, and US Attorney General John Ashcroft slapped a State Secret Priveleges gag order on Edmonds to prevent her from speaking out about it when she blew the whistle. But she’s recently defied that gag order.

She claims that one of the buyers of these stolen nuclear secrets was Inter-Services Intelligence (ISI), Pakistan’s intelligence agency [1], who were working with Pakistani scientist Abdul Qadeer Khan, the man responsible for Pakistan’s nuclear bomb. Part two of this series follows the trail of A.Q. Khan and his nuclear black market network.

The Path of Khan

In 1972, A.Q. (let’s call him A.Q.) received his PhD in metallurgy and got a job in the Netherlands working for the Physical Dynamics Research Laboratory. This was a subcontractor for URENCO, a uranium enrichment facility. In 1975, the year after Pakistan’s mega-rival India started a nuclear programme, A.Q. stole technological secrets (specifically blueprints for centrifuges) from URENCO and by 1976 was back in Pakistan, where the Prime Minister at the time, Zulfikar Ali Bhutto, put him in charge of the country’s uranium enrichment programme. By 1985 they were producing weapons-grade uranium [2].

A.Q. had a huge list of contacts from his stay in Europe and these contacts and their companies sold him (and thereby Pakistan) the parts he needed. He ordered more than he required, and built up a stockpile. Having these extra parts meant that he could develop a sideline project: selling information and parts to other interested parties, outside Pakistan. Customers included Iran, Libya and North Korea. In addition to that, Pakistan’s own programme was progressing so rapidly that he could sell obsolete parts from Pakistan’s nuclear project second-hand as well. He used the same network of businessmen to get stuff out that he used to get stuff in [3].

All this and plutonium too

In the mid-1980s, Pakistan’s nuclear programme developed an interest in plutonium [4]. In May 1998, Pakistan conducted six nuclear tests and became a nuclear power. The first five tests involved enriched uranium, the sixth plutonium [5].

A.Q.’s black market operation continued, in cahoots with Allah-knows-who in the Pakistani military establishment. Those arch-hobgoblins Al Qaeda were potential customers at one point. Some of A.Q.’s middle-men met Osama Bin Laden a few weeks prior to 9/11. ‘We were aware of contact between A Q Khan’s people and Al-Qaeda’ a former CIA officer told the Sunday Times in January 2008 [6].

In 2003, A.Q.’s network was publicly exposed. A German ship called the BBC China, travelling from Dubai to Libya with centrifuges on board, was intercepted in October 2003 in the Suez Canal, due to intervention from the CIA, who were spying on it [7]. The network had already supplied Libya with the blueprints for a nuclear bomb [8]. Libya then gave up its ‘WMD’ procurement programme in December 2003.

The international community put pressure on Pakistan, so in January 2004, A.Q. became the scapegoat and was fired from his official job as scientific advisor to the President, General Musharraf. The following month he went on TV and confessed to running the nuclear proliferation ring. A.Q.’s guilt thus pronounced, Musharraf was satisfied that the scientist was taking the rap (thus covering for his helpers in the ISI and military). Time magazine put A.Q. on their cover, with the title ‘The Merchant of Menace’. But he was seen as a hero by the public in Pakistan, so Musharraf couldn’t get away with really punishing him. A.Q. was given an official pardon. He didn’t go completely unpunished, though; he remained under house arrest until 2007 [9].

But remember that the FBI investigation that Sibel Edmonds was part of began and ended before A.Q. Khan was exposed. This means American nuclear secrets were a commodity on this black market for years before A.Q. was stopped. Since the FBI investigation was shut down in 2002, we don’t know what has gone on on U.S. soil since then, and furthermore, we don’t know if there are huge portions of A.Q.’s network still in operation or not, now that he’s gone from the scene. Was only one ring exposed, the one operating out of Dubai?

Lord of the Ring

Anyway, Luke Ryland, who blogs about the Sibel Edmonds case, lists some of the key figures in the ring [10]:

‘BSA Tahir, based in Dubai, was AQ Khan’s Chief Operating Officer and right hand man. Tahir began working with Khan in 1995. In 2002, Tahir recruited Urs Tinner to help produce centrifuge parts, supplied in part by his brother and father. Tahir’s involvement in the network was documented in a Malaysian Police Report in 2004′ (following the seizure on board the BBC China of the containers containing centrifuges that had come from a factory in Malaysia [11]).

‘Asher Karni and Zeki Bilmen. Karni is an Israeli businessman based in South Africa. Zeki Bilmen is a Turkish businessman and CEO of Giza Technologies, headquartered in New Jersey. Karni purchased 200 spark-gaps in the United States from Giza Technologies in 2003 and then re-exported it to Pakistan’s intelligence service, the ISI. Prior to 2002 Bilmen was also overheard on wiretaps translated by former FBI translator Sibel Edmonds.’

‘Peter Griffin is a Dubai-based British man who was said to have a “central role” in Libya’s nuclear bomb program. Griffin also supervised Tahir’s project to build a manufacturing facility in Libya.’

‘Gerhard Wisser was a German national, based in South Africa, who supplied the pipes required for centrifuges. According to prosecutors, he was the South African “conduit” to the Tahir-Tinner ring.’

Turkish connections will be explored further in part three of this series. The events surrounding the trial of the Tinner family of engineers in Switzerland (Friedrich Tinner and his sons Urs and Marco) will be the subject of part four. At some point – in part four or five – I’ll also look at what has happened to the other members of this ring, who, although caught, don’t seem to have been punished and whose companies are still operating.

In another blog entry by Ryland [12] he emphasizes that it was not just Iran, Libya and North Korea on the nuclear black market. We know about Turkey. We know about Malaysia. We know about Dubai. How many other nations and locations were involved? There was a worldwide scope to the A.Q. network. One can plainly see now how freaked out Sibel Edmonds must have been about American nuclear tech being sold to the Pakistani ISI and Dr A.Q. Khan! It could have gone anywhere.

I wrote in the first paragraph above that ‘Sibel Edmonds listened to wiretaps of Turkish agents in the USA, who were stealing American nuclear secrets and selling them on the black market’. But I did not explain how these Turkish agents were stealing these nuclear secrets. That’s going to be the subject of the next part of this series. I’ll be writing about ‘certain Turkish entities’, their influence in America, and how they were being watched by none other than the outed CIA agent Valerie Plame, in the episode entitled……… ‘Couldn’t you keep that to yourself?‘

Contact him here.
previous article
Haunted Dublin book – Chilling accounts of the supernatural
next article
Black Market Nukes! Part three: Couldn’t You Keep That To Yourself?