Today, 18 October, is Lee Harvey Oswald’s birthday. He would have been 74 today (JFK would be 96). At the time of his 24th birthday, in 1963, his wife Marina and their 20-month-old daughter June were living outside Dallas in Irving, in the house of Ruth Paine. During weekdays, Lee stayed in the Dallas suburb of Oak Cliff.

His activities in New Orleans and Mexico were behind him now. He had been working in the Texas School Book Depository since the 16th. On the 20th, their second daughter, Rachel, would be born.

On his birthday, Marina and Ruth ‘made quite an occasion of it. Ruth brought wine, decorated the table, and baked a cake. When the cake was carried in, glittering with candles, everybody sang, “Happy Birthday, Lee.” Lee was visibly moved, and his eyes filled with tears’ (Summers, The Kennedy Conspiracy, p.282).

In the 3 December 2001 issue of The New Yorker (pp.72-85), on pages in between lame, irrelevant cartoons, Thomas Mallon interviewed Ruth Paine (b.1932) about this time of her life when Marina and her children lived with her, in an article entitled ‘Marina and Ruth’. It included the above photo of Marina, taken by Allan Grant of Life ‘in Ruth’s back yard the day after the assassination’.

(Quotations are from Mallon’s article.)

Ruth Paine and her husband had become estranged and had begun the process of getting a divorce. She lived alone with her two children, Lynn (b.1959) and Christopher (b.1961). A member of the Society of Friends, she learned Russian because of ‘Quaker efforts to foster international good will’ and met Lee and Marina at a party in February ’63. Marina spoke no English, and during this period of living in Texas (June ’62-April ’63) the Oswalds primarily socialized with Russian speakers (less so after their return from New Orleans, especially as George de Mohrenschildt had moved away to Haiti in June ’63), so it was not hard for Ruth to befriend Marina. 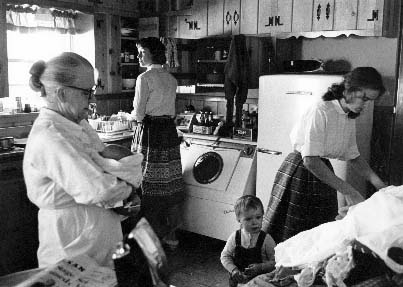 They would visit each other’s houses, and in March Marina revealed to Ruth that Lee wanted to send her back to the USSR. (We shall see in the next blog entry if official government files bear this out.) This was on Ruth’s mind on 24 April when she drove Lee to the bus terminal to New Orleans; he was going back to his home town, with the plan that Marina and June would join him when he found a job. He had been unhappy in Dallas, quitting his job as a welder and then getting fired from a job at a graphic-art company. Ruth offered to take Marina and June in with her until he found a job, and the offer was accepted. Privately, she wanted Marina to have the choice to stay in the US if she wanted to.

Lee found a job working on coffee machines, and on 10 May Ruth drove Marina and June to him. Things did not go happily for the Oswalds in New Orleans, however, and Ruth came back for Marina and June in September. They went to live with her in Irving again, while Lee told Ruth he’d look for work in Houston or further afield. But Marina knew that Lee intended to go to Mexico to try to get a visa for Cuba, where as a Marxist presumably he intended to ‘offer himself to Castro’s revolution’ (?).

But as we know, the Cuban consulate in Mexico City would not give Oswald an immediate visa for Cuba, and so on 4 October he arrived back in Irving, looking defeated. He got a room in Oak Cliff, a convenient location for looking for work in Dallas. On 14 October, Ruth and Marina had coffee with a neighbour, Linnie Mae Randle, whose brother Buell Wesley Frazier worked at the Texas School Book Depository, and Randle tipped them off about a job. Ruth phoned the warehouse manager, Roy Truly, and obtained an interview for Lee, who then got the job…

On the day before the assassination, Lee unexpectedly showed up, even though it was a Thursday (he normally only stayed over on weekends). He had argued over the phone with Marina on the Monday, and Ruth’s impression was that he was there to patch things up. She knew that while in the house he had gone into the garage, because the light was left on and the frugal Marina never did that. It was only after Lee was arrested for the Tippit murder, when the police came into the house, that Marina told the police something that Ruth did not know – that Lee kept a gun in the garage. A gun that was now gone. 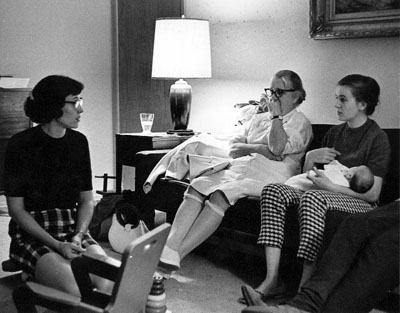 Ruth’s ex-husband Michael Paine told Mallon that he had seen the photo of Oswald with the gun in ’63, thought nothing of it, and ‘only after the assassination… he realized that his Quaker wife was “so allergic” to guns that “she would have forbidden [Oswald] to have the rifle in the house”‘. Mallon points out that Ruth was so dedicated to peace she would not have welcomed him back in October and thus would not have given him the job tip. If Lee was not in the Book Depository, would the assassination have taken place? ‘Could it have made a difference?’ Ruth asks Mallon as her voice ‘trails off’.

At some point during the day after the assassination, Marina went off to a hotel with Lee’s mother Marguerite, a translator, and a journalist, Thomas Thompson (Life). Lee phoned the house asking for Marina. Ruth was unable to get in touch with Marina at the hotel, because Marguerite answered the phone and said, ‘We really can’t be too concerned about what Lee thinks at this point.’

This was really the end of Ruth’s sisterly friendship with Marina. When Lee was murdered by Jack Ruby the next day, an Irving policeman came into the house with a rifle and closed all the windows. The police were now worried that Ruth or others would be bumped off. Marina and her children were taken into protective custody by the Secret Service.

Ruth missed her, though, and made attempts to get in touch. This backfired on 30 November, when Ruth sent some of Marina’s belongings to her ‘via the Dallas police’. This included a book, which had folded inside it a ‘note that Lee had left for Marina… on April 10th’, the night he allegedly shot at General Walker (referred to in a previous blog entry), and this letter included instructions to Marina ‘If I am alive and taken prisoner’. This ‘linked Lee, for the first time, to the Walker shooting’ and led to interrogations by the Secret Service of both Marina and Ruth.

Ruth made many attempts to contact Marina, but received only a Christmas card with ‘zero content’. It seems like the usual sad kind of thing where one person tries to keep a deep friendship alive, while for the other it is gone, and can only reflect back perfunctory pleasantries. They met only once more, about a year later, in a meeting the purpose of which was for Marina to tell Ruth not to worry about testifying for the Warren Commission, that they were ‘nice people’.